SAARC FESTIVAL OF LITERATURE was organised by the Foundation of SAARC Writers and Literature from 13th to 16th March 2009 at Agra. Poets, writers, artists, scholars, intellectuals, academics, media persons, film makers and social activists from all the eight SAARC countries : Afghanistan, Bangladesh, Bhutan, India, Maldives, Nepal, Pakistan and Sri Lanka, as well as from Myanmar, came together at Agra with a common purpose : to interact with each other about the common threat of Terrorism that these neighbouring countries are facing; to find ways of helping each other; and to explore how all this is being reflected in our creative endeavours.

The theme of the Festival was: Role of Writers and the Creative Fraternity in Times of Terror.

Terrorism has become a grave menace to the world, especially for the SAARC region. In this context, Delegates of the SAARC countries discussed Terrorism in all its aspects and manifestations, in order to explore ways of liberating humanity from the clutches of this evil presence in our midst. The whole world seems to be in a state of despair and helplessness. It is for the writers and thinkers to find a way out of this predicament. Accordingly, the think tank of FOSWAL identified writers from the SAARC region who have not lost hope, who have the courage to dream of a better world and whose convictions for Peace are reflected in their writings. 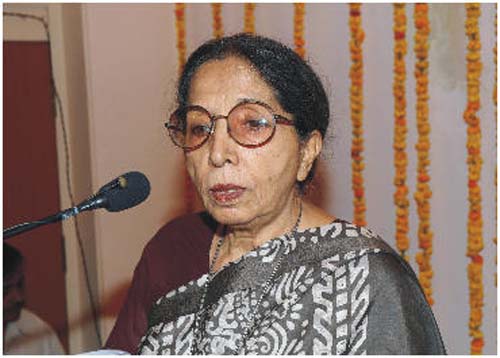 Ajeet Cour, President FOSWAL, the original dreamer who launched this unique dream in 1987, welcoming the Delegates and Dignitaries

The Prime Minister of Bangladesh : Mohtrima Sheikh Hasina Sahiba had accepted to grace the Festival as our Chief Guest, but was held back by some happenings which needed her urgent attention. She therefore sent a detailed letter, overflowing with genuine affection for Ajeet Cour and admiration of the work FOSWAL was doing for peace in the region, and sent two representatives to attend the Festival. A similar affectionate letter was received from the Prime Minister of Bhutan, H.E. Lyonpo Jigmi Y. Thinley.

The writing fraternity shared their concerns about terrorism, and underlined its own responsibility. When the society is caught up in a desperate situation, it is for the writers to take the initiative and indicate options available to overcome the problem.

The authors realized that terrorism was a man-made problem and therefore it could be solved, and must be solved, by the humanity itself. No divine help will come to their rescue. The society itself will have to find a way out of the dark shadows of terrorism.

The Delegates were of the opinion that terrorism could not be put down merely by arms and weapons. The thinking process of people has to be changed. All of us have to learn how to respect the ‘otherness’ of ‘others’. Tolerance, Patience and Understanding can resolve any problem between individuals, communities, nations or ideologies. Dialogue is the Hotel, Agra, in which Dr. Sheel Kant Sharma, Secretary General of SAARC; Dr. Kheya Bhattacharya, Joint Secretary SAARC, Ministry of External Affairs;, and Ajeet Cour, President of FOSWAL, informed the print and electronic media representatives about the mega event which would have several Academic Sessions as well as Sessions of Readings of Poetry and Fiction by authors from across the 8 SAARC countries and Myanmar.

On 13th March, SAARC FESTIVAL OF LITERATURE began at the Grand Hotel, Agra, with a warm-hearted Welcome Address by Ajeet Cour, President of FOSWAL. 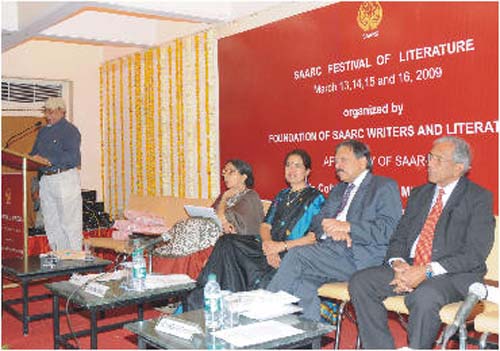