The Foundation chose Maldives in April 2003—a destination which has been in the vanguard of promoting goodwill, amity and friendship among the creative people and intellectuals of the South Asian region.
The literary discussions and interactions at the Maldives Conference focused on the following themes :
• The Voice and Cultural Identity of South Asia in Contemporary Literature.
• Concerns of the Writers for Peace and Coexistence in the Region.
• Common Cultural Roots of the Seven SAARC Nations Lying Intertwined in the Folklore and Folksongs of the Region.
• Politics, Conflict, and Creativity : Relevance of Writers in the Present Strife-Torn World. 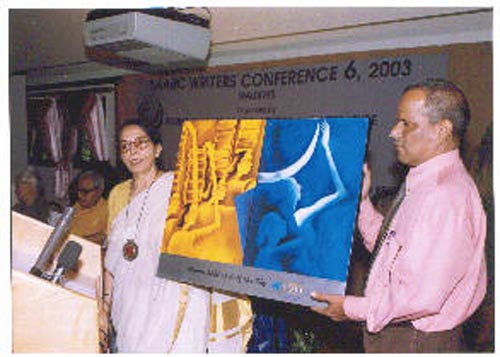 Ajeet Cour, President of Foundation of SAARC Writers and Literature, and the President of National Chapter of Maldives Mr. Ahmad Shakir with Arpana Caur’s painting—adopted by U.N. and printed as poster “Women Hold Up Half The Sky”. 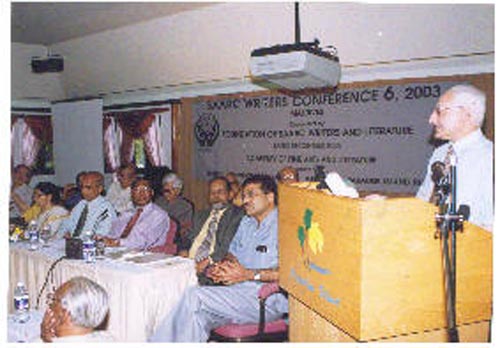 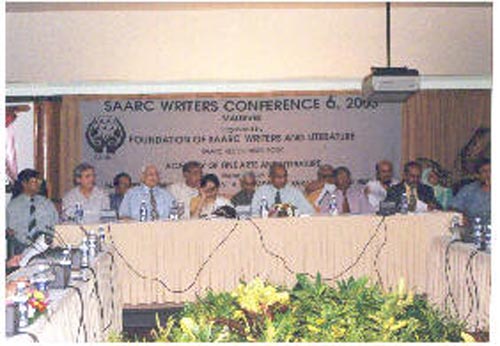 Prof. M. Tawfik, of UNESCO, Ministers and Ambassadors with Ajeet Cour at the Inaugural Function of the Sixth SAARC Writers Conference at the Paradise Resort, Maldives

We, the writers of the seven SAARC Countries participating in the Sixth SAARC Writers Conference in Maldives, organized by the Foundation of SAARC Writers and Literature, the SAARC literary wing of the Academy of Fine Arts and Literature, from 19th to 22nd April, 2003,
Consolidating the voices of the creative fraternity of the region to protect and revitalize the plurality of languages, cultures and cultural expressions,
Resisting the unipolar forces of suppression and intolerance by our collective commitment to freedom of expression and the preservation of the uniqueness of our cultures,
Channelising our creative energies to ensure an environment devoid of hunger, poverty, illiteracy and deprivation,
Protecting our civilisational and cultural values against the onslaught of the forces of globalization,
Recognising the fact that many political systems are tempted to suppress the voice of sanity and dissent,
Declare that:

1. We do not believe in the clash of civilizations but believe in their harmonious and mutually enriching coexistence.
2. We totally disagree with the obscurantist forces of religious bigotry and believe in the intrinsic unity of all religions.
3. We shall, as creative writers, endeavour to foster and realize emotional connectivity through people-to-people contacts to enhance understanding and mutual trust, despite the half-hearted and piecemeal efforts of the archaic establishments.
4. We denounce the unjustified war on Iraq, the loss of civilian life and most importantly the irreparable damage and devastation of a priceless civilizational heritage.
5. We believe that dialogue is the key to peace and harmony, development and growth in the world, and more so in the SAARC region, and call upon the member nations to facilitate people to people contacts and greater mobility for the creative fraternity of the region, thereby creating a cordial and friendly environment for strengthening cultural, intellectual and creative linkages.
6. We are actually aware that the struggle for freedom, multi-polarity and pluralism is going to be a long and arduous one and that we have to engage ourselves in it, since borders and boundaries must be transgressed, to reassert the ultimate freedom, dignity and nobility of humankind. Prof. Indira Goswami and Mrs. Yumna, daughter of the President of Maldives, with Ajeet Cour in Male

The Foundation of SAARC Writers and Literature organized a literary interaction of a group of Indian writers with their counterparts in Bhutan. The interaction was held from 31 August to 3 September, 2001.
It was considered essential that the creative writings of Bhutan are provided an opportunity to be known and read throughout the South Asian Region, and the Foundation of SAARC Writers and Literature was requested to be the catalyst for such dissemination.
The Centre of Bhutan Studies, the Foreign Secretary as well as the head of Asia and the SAARC Division of Bhutan urged Ms. Ajeet Cour to bring more and more writers of the region to Bhutan. They averred that such opportunities for cultural exchange would provide new directions and proper exposure to the Bhutanese writers and their writings.
The Bhutan Literary interaction is signi