Films on this unique event have been made by IGNOU and Doordarshan.

The Foundation has a long-term plan to do a lot of work in the area. We are certain that this will pave way for more lasting ties among our neighbouring countries as we share a lot of perceptions, narrative typologies and modes of imagination at the level of folklore.

Enquiries are already pouring in from across the globe about this first-ever initiative of FOSWAL. We intend collecting, promoting, recording, and studying the folklore of the SAARC region, preserving the research in books, films, photographs, and in audio and video CDs.

Vasumally Pothily, a member of the Toda Tribe of the Nilgiris, a tribe which is getting extinct, but is persevering with its last breath, literally, trying to keep alive its cultural traditions and its folklore, formally inaugurated the event by breaking the auspicious coconut. The Todas are a pastoral tribe of very ancient origin and are struggling against the onslaught of modernization and urbanization. They are literally struggling for their own survival and the survival of their language, culture and identity. Vasumally Pothily was decorated with shawls by Mr. V. P. Singh, Dr. Kapila Vatsyayan and Ajeet Cour, symbolizing the need of honouring the ignored, the marginalized and the forgotten.

Dr. Kapila Vatsyayan, in her brilliantly luminous speech, reiterated her views about our rich cultural traditions. She forcefully focused her ideas, expressed so beautifully in her profoundly scholarly study 'Traditions of Indian Folk Dance', that "social and cultural anthropologists, folklorists, art historians….working in the fields of social and cultural anthropology….need to be more concerned about studying and salvaging and recording and encouraging the surviving folk traditions."

Dr. Kapila Vatsyayan is a monumental intellectual, one of the foremost crusaders of Cultural Heritage and Folklore, not only in India but in the SAARC region and in the world at large. Her views on culture, on civilisational evolution, on dance and music and folklore are so profound, and her dynamic personality so luminous that it is a proud privilege to hear her ! She is a former Secretary to the Government of India and the former President of the Indira Gandhi National Centre for the Arts, 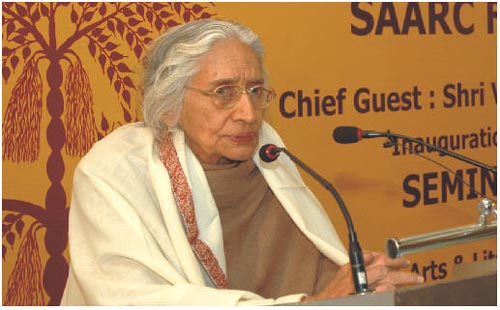 (IGNCA), a Member of Parliament, and a leading scholar and writer.

Addressing the audience, Dr. Vatsyayan was in her element when in her usual deep, contemplative, and stimulating speech, she shared her views about the importance of folk culture, around the world, being the basis of every civilized society. She spoke of the need for the protection and preservation of marginalized cultures as the collective heritage of mankind. She expressed her anxiety and anguish over the present status of folk artists who are being marginalized, ignored, and kept outside the mainstream culture.

he reconnected Folklore with the organic context. She said that if those people who had never been showcased as part of our identity are decontextualised, our planet would never have the organic potential for regeneration. Every time they are isolated from their functions of connecting and balancing the landscape and the humanscape.

She wished all success to the Seminar and hoped that this Seminar would be creative and would bring forward concrete ideas to explore and preserve, and conduct research on the vanishing folklore. 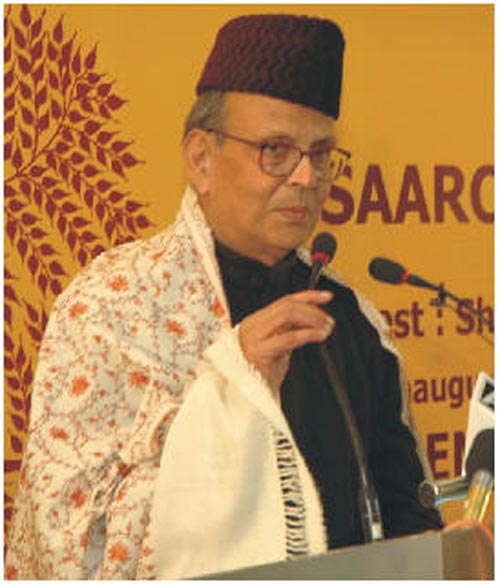 The Chief Guest of the evening Shri V. P. Singh is a poet, painter, and former Prime Minister of India. He is Chief Advisor of FOSWAL and is well known as the Messiah of the underprivileged and marginalized communities of India. In his graceful and lyrical address, he emphasized the need for protecting the diverse, vibrant and ignored Folklore Studies and Folk Performing Artists of the country.

He painted in words how Folklore connects one's thoughts to one's childhood memories, and also how these childhood stories derived mainly from folklore, prepare people for their journey of life. He talks from the heart, and reaches out to the hearts of the audience.

Mr. V.P. Singh, former Prime Minister of India and the Chief Advisor of the Foundation, delivering his lyrical, inspiring and enlightened speech Ajeet Cour, the President of FOSWAL and an eminent writer of more than 20 books of fiction, social and cultural activist and a crusader for human rights, in her inspiring Welcome Address, in her usual style brimming with zeal, passion and enthusiasm, spoke of the past activities of FOSWAL which is the only APEX BODY OF SAARC in the field of writers and their literature, and cultural initiatives in the eight SAARC countries, responsible for cultural connectivity in the SAARC region through Writers' Interactions, Conferences, Cultural endeavours, Folklore Festivals, Poetry Festivals, Theatre Festivals; Conferences of the Tribals, Ms. Ambika Soni sharing her admiration of the Festival with Ajeet Cour and Arpana Caur